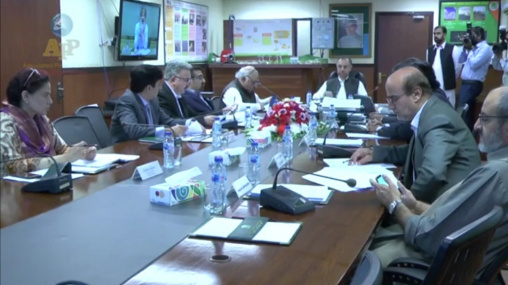 Atif Abbas
Islamabad: The federal government has decided to take provinces on board to decide major projects of renewable energy under new ARE Policy 2019.

The new policy aimed at setting up the steering committee comprising of all provinces and co-opted members who will decide major projects of renewable energy.

The Alternative Energy Development Board in its 46th Meeting held on Thursday under the Chairmanship of Federal Minister for Power Mr.  Omar Ayub approved the draft ARE Policy 2019 on the basis of consensus of all members.

The 46 th Board Meeting of the Alternative Energy Development Board (AEDB) was held at AEDB, Islamabad on 10 th October, 2019 under the chairmanship of Mr. Omar Ayub Khan, Federal Minister for Energy (Power Division) / Chairman AEDB. Federal Secretary Power Division, Mr. Irfan Ali and all the Provincial Energy Secretaries attended the meeting.

The AEDB Board deliberated upon the draft ARE Policy 2019, that was prepared by AEDB in consultation with public and private sector stakeholders including provincial government agencies. The representatives of provincial governments and other Board members provided their inputs on the ARE Policy 2019 draft. Consensus was developed on several inputs and suggestions given by the Provincial representatives aimed towards improving the policy framework.

Chairman AEDB / Minister for Energy (Power Division) stated that the policy aims at creating a conducive environment supported by a robust framework for the sustainable growth of ARE Sector in Pakistan and increasing the share of renewable energy in the energy mix in order to achieve the strategic objectives of energy security, cheaper power generation and environmental protection. He further stated that the policy framework has an all-inclusive approach and stipulates an active role and participation of provincial governments at all stages of ARE developments.

Federal Secretary Power Division, Mr.   Irfan Ali on the occasion appraised the meeting that for the first time a very ambitious yet workable policy has been attempted to tap the indigenous resources of the country. He said that the policy provides for the steering committee comprising of all provinces and co-opted members who will decide major projects of renewable energy. He said that Provincial participation has been increased in the new draft of renewable energy. He thanked all the participants of their valuable inputs which made the policy further refine.

The Federal Minister for Energy, Federal Secretary Power and all other members of the Board congratulated CEO AEDB, Dr. Rana Abdul Jabbar Khan and his team on the tireless efforts towards formulation and approval of the policy.