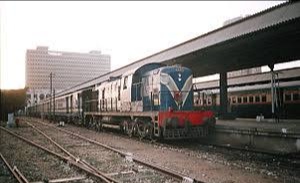 ISLAMABAD:Cabinet Committee on CPEC on Monday decideld to commence financing discussion over ML-1 project with China.

Secretary Planning gave a detailed presentation to the participants on various projects under CPEC framework. The Committee decided that financing discussion on ML-1 project should be commenced to finalize the mode and PC-1 of the project. The Minister reiterated that it is a very important project under CPEC portfolio and the incumbent Government is committed to fast track it.

Minister for Planning apprised that CPEC is now entering into next phase with incorporation of new additional areas and for this purpose there is a need for an integrated entity in the form of CPEC Authority. It was decided that draft act of the Authority be presented to Federal Cabinet for approval.

The Committee held detailed discussions on various projects under CPEC in infrastructure, energy and other areas. About Rashakai Special Economic Zone, it was apprised that negotiations on Development Agreement is in final stages with CRBC. The Committee directed to ensure early provision of utilities to Rashakai SEZ on priority so that groundbreaking could be performed next month. Minister for Planning said that the Government is committed to provide incentives for SEZ’s including 100% repatriation of profits.

The Committee also decided to present land use plan for Gwadar Smart Port city to the Federal Cabinet after incorporating recommendations of the Balochistan provincial government.

Energy projects including 300 MW Gwadar Coal Power Plant, Kohala Hydropower Project (1124 MW) and Thar coal projects, Infrastructure projects including Multan-Sukkur Motorway and Orange Line Train project were also deliberated upon. It was apprised that Multan-Sukkur Motorway will be inaugurated soon. The civil works on Orange Line Train Project will be completed by December this year.

Minister for Planning emphasized that all stakeholders should resolve all pending issues pertaining to CPEC projects at the earliest to accrue maximum benefits from the forthcoming Joint Cooperation Committee. It was decided to convene next meeting of Cabinet Committee on CPEC in September.