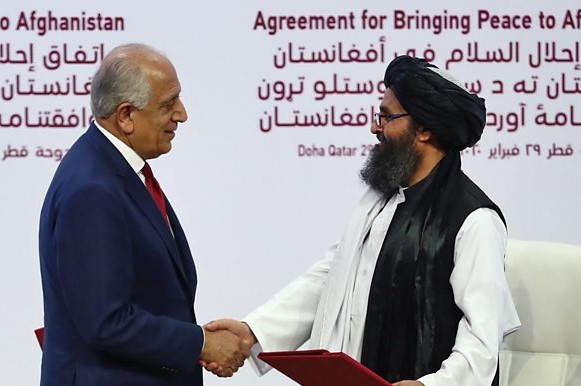 Islamabad: The Institute for Policy Reforms on Tuesday issued a Fact Sheet titled “The US-Afghan Deal”, analyzing the likelihood of success of the recently concluded US-Afghan peace deal, especially in the context of the many new and enduring challenges faced by the region and the world. Given the world’s total focus on the Corona pandemic, the peace deal may be off the front pages for now. Yet for Pakistan, it is a key, if not a top, priority.

The February 29, 2020 “deal” between the US and the Taliban, has appeared to be a possible harbinger of peace. Immediately upon signing, however, the deal began to unravel over the release of prisoners and the timing and modality of the ceasefire. The US has been conveying inconsistent messages to the Taliban on the one hand, and to Kabul on the other, jeopardizing the trust of both.

Other developments make events even more complex. Kabul, at present, has two parallel and mutually hostile governments. There are other stakeholders who answer to neither of the pretender governments. The question then is, who are the Taliban expected to engage with if they are serious about a dialogue with anyone in Kabul. More alarming, there is a real threat of a Pashtun vs non-Pashtun split in Afghanistan.

On the other hand, despite the current mess, there is a war weariness that could induce the parties to consider a compromise. It is thus possible that the February 29 deal proves to be a turning point towards relative peace and abating decades of Afghan suffering. Perhaps, it would lead also to build a minimum trust and goodwill between Kabul and Islamabad.

For this to be possible, a number of problems must be addressed. They include the nature of US policy towards Afghanistan. Does it really wish to exit from Afghanistan or is it just an electoral gimmick, to strengthen the probability of President Trump’s re-election. Moreover, the strategic elite in Washington seem to be more concerned about limiting Russian and Chinese influence in the Eurasian heartland.

Other questions pertain to the Taliban. It needs to be seen if they can maintain their unity and negotiate an understanding with the US that translates their battlefield resilience into a broad-based political dispensation, which does not alienate whole segments of the Afghan political spectrum.

Secondly, can it enable the US to progressively abandon its support for the fatally weakened Kabul regime, that is unwilling to concede to the necessary political presence of the Taliban. Lastly, who is going to fund Afghan reconstruction, demobilization, disarming and rehabilitation, refugee return, and security sector reforms. These questions are difficult to answer, yet they impact the outcome in Afghanistan and the region.

Pakistan’s role in this current situation in Afghanistan is indeed a challenging one. It faces a slew of emergencies. The slide towards climate catastrophe is one. The more immediate challenge of the COVID-19 pandemic is another. Both could decimate whole populations around the world, including in Pakistan.

And then there is India’s hate filled belligerence. Pakistan is confronted by India’s fascist tendencies, which sees the very existence of Muslims in the subcontinent as an obstacle to fulfilling its destiny of becoming a Hindu superpower. This last, in itself, is a perilous scenario that could develop into a genocidal situation since both countries are nuclear armed.

At home, the usual concerns remain with the quality of governance, functioning of institutions, and national and regional politics. At the same time, economic growth, job creation, delivery of basic services, and human resource development must emerge from years of neglect. Meanwhile the population explosion is on course towards 400 million by 2050.

In the current situation, it is unlikely that Pakistan could play a seminal role in bringing peace to Afghanistan. However, if somehow, it finds a way towards positive transformation, then opportunities to contribute towards regional stability could emerge.

This positive transformation would include Pakistan being viewed as a non-partisan stakeholder in the region. Pakistan’s policy elite would do well to be informed also by the perceptions of those in the country who have the closest cultural ties with Afghans. Above all, any strategic cooperation with Afghanistan can only be a byproduct of successfully overcoming the daunting domestic and external challenges that confront Pakistan.