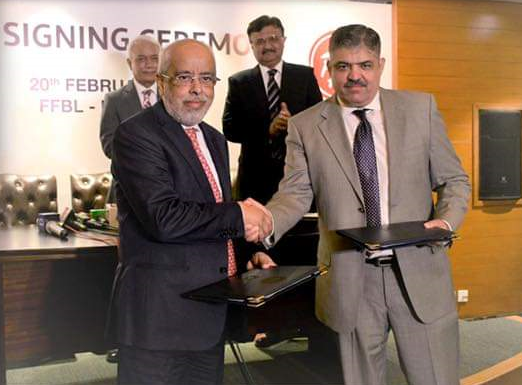 Atif Abbas
Islamabad: Fauji Foods Limited has signed a deal with Pizza Hut to provide all type of cheese used in Pizza Hut, International fast food chain across the country.

It is estimated that over 700 tons of cheese will be supplied.

Pizza hut has close to 150 branch networks across Pakistan and Fauji Foods is part of Fauji Foundation group which is largest conglomerate in Pakistan. Fauji Foods is currently selling cheese under its brand name “Nurpur Cheese”.

Fauji Foods Limited (PSX: FFL) was formed in 2015 after acquiring Noon Pakistan Limited. The latter was established in 1966 as a public limited company. FFL’s product portfolio includes flavoured milk, cheese, butter and UHT milk under the brand name ‘Nurpur’ while other products include fruit drinks and tea whitener.

The change in company ownership brought with a change in strategy. The company launched Dostea (liquid tea whitener), Nurpur (original) and Nurpur (pasteurized) in a novel packaging. Along with a fresh packaging, the company also undertook intensive marketing campaigns which are evident by the escalation in advertising/selling/distribution expenses as a percentage of top-line.

Despite the adverse macroeconomic environment, FFL, according to its annual report, remained positive about the future of the country’s economy. The company hopes that China Pakistan Economic Corridor’s (CPEC) contribution to the development of infrastructure would drive the growth momentum and consumption of the economy which would result in greater demand and reach for their product.