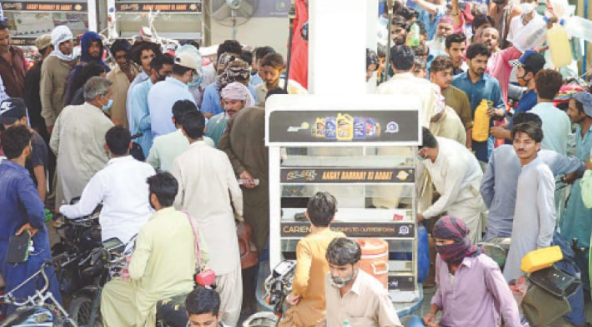 Islamabad:Inquiry Commission on Petrol Crisis has grilled the officials of OGRA team appearing before the Commission along with representatives of OMCs for not preparing the sale records of products of last seven years as desired by the Commission to ascertain the culprits behind this mega scam of swindling billions of rupees from poor consumers.

Head of Inquiry Commission, a senior FIA official get infuriated, when representatives of OMCs told them, they submitted the required information at the midnight to OGRA head office but OGRA team comprising sizable number of official came empty hands before the Commission, one of the OMCs told Newztodays.com

Only two foreign OMCs told the Commission that they have everything in order as per Authority’s regulation but the rest of OMCs simply in a one-page answer by saying, “it did not apply to them.”

One OGRA officials objected that state-run OMC—PSO did not bother to attend this moot of OMCs before the Inquiry Commission that held its first meeting at a training centre of Oil & Gas company in federal capital whereas another OMCs also did not appear by saying that they did nothing wrong during the petrol crisis starting in March 2020, another participant told this scribe.

OMCs were asked to submit three questionnaires pertaining to relevant authorization of K form from Explosive Department is valid, if they (retailers) do not valid K form but still operating and number of cancelled retail outlets from OMCs for not having K form. They were also asked to give details of sale in Special Areas, the same official added.

Head of Inquiry Commission made it clear to the participants who are more than 50 and will also appear today (Wednesday) before the Commission, “Do not try to teach him, he started his career from junior rank and all the regulations of the Authority, he has learnt by heart.”

Earlier, the government had formed a committee, headed by the director general (DG) oil and comprised a representative of the Federal Investigation Agency (FIA) and The Oil and Gas Regulatory Authority (Ogra) imposed a penalty of Rs55 million on several OMCs for the oil shortage in the country. These companies included Shell, Total Parco, Puma Energy, GO, Hascol, Attock, Byco, Askar and BE Energy.

This committee informed the prime minister that nine companies were involved in oil hoarding that led to the shortage. Prime Minister Imran Khan then constituted another four-member committee to probe the shortage of petrol and fix responsibility and the committee, led by Shahzad Qasim, Special Assistant to the PM, comprised former Ogra member Rashid Farooq, Petroleum Institute of Pakistan CEO Asim Murtaza and former PSO executive Naazir Abbas Zaidi, but finding of this committee never came when PM constituted Inquiry Commission on the issue.