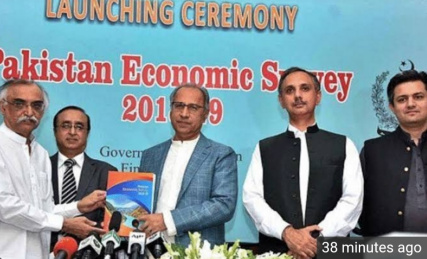 Islamabad: Pakistan has missed a target of economic growth that stands at 3.29 per cent against the ambitious target of 6.2 percent for ongoing financial year 2018-19.

According to Pakistan Economic Survey 2018-19 released on Monday, the target of economic growth was based upon sectoral growth projections for agriculture, industry, and services at 3.8 percent, 7.6 percent and 6.5 percent respectively.

The growth in industrial sector has been estimated at 1.40 percent. The mining and quarrying sector has witnessed a negative growth of 1.96 percent mainly due to reduction in production of natural gas (-1.98 percent) and coal (-25.4 percent). The large-scale manufacturing sector as per QIM data (from July 2017 to February 2018) shows a decline of 2.06 percent.

Electricity and gas sub sector has grown by 40.54 percent, whereas the construction activity has declined by 7.57 percent. The services sector has shown an overall growth of 4.71 percent. Wholesale and Retail Trade grew by 3.11 percent, while the Transport, Storage and Communication sector registered a growth of 3.34 percent mainly due to positive contribution by railways (38.93 percent), air transport (3.38 percent) and road transport (3.85 percent).

Finance and insurance sector showed an overall growth of 5.14 percent. While the central banking has declined by 12.5 percent, a positive growth has been observed in scheduled banks (5.3 percent), non-scheduled banks (24.6 percent) and insurance activities (12.8 percent). The Housing Services has grown at 4.0 percent. The growth recorded in General Government Services is 7.99 percent which is mainly on account of increase in salaries of employees of federal, provincial and district governments.

The National Savings remained at 10.7 percent of GDP against the target of 13.1 percent. The consumption growth was recorded at 11.9 percent compared to 10.2 percent growth recorded last year. As percentage of GDP, it increased to 94.8 percent compared to last year’s figure of 94.2 percent. On the demand side, the exports declined by 1.9 percent despite exchange rate depreciation, while imports declined by 4.9 percent. This helped in reducing the trade deficit by 7.3 percent during July-April 2018-2019 while it had shown an expansion of 24.3 percent during the corresponding period of last year.

The workers’ remittances played a major role in containing current account deficit to 4.03 percent of GDP. The CAD showed a contraction of 27 percent during July-April of the current year while it had expanded by 70 percent during the corresponding period of last year. The State Bank is following a contractionary policy to anchor the aggregate demand and address rising inflation on the back of high fiscal and current account deficits.

The next year, agriculture sector is likely to rebound under Prime Minister’s Agriculture Emergency Program. The water availability is expected to be better as compared to current year. There is substantial increase in Agriculture Credit disbursement which is recorded at Rs. 805 billion during July-April FY2019 compared to Rs.666.2 billion during the corresponding period of last year, posting a growth of 20.8 percent. The import of agriculture machinery has recorded a growth of 10.95 during July-April 2018-2019 which is a good indicator.

The base effect will also support growth in agriculture. Overview of the Economy iii The Large-Scale Manufacturing sector which posted a negative growth this year is likely to rebound on the back of expected growth in agriculture sector along with government initiatives in the construction sector, SMEs sector and tourism and automobile sector. Both, agriculture and LSM sector growth is likely to have a good impact on services sector on account of goods transport services linked to agriculture and wholesale trade.

The fiscal tightening and the rising inflation on account of increasing utility prices, rationalization of taxes, measures to reduce the primary balance, and any further exchange rate adjustments, alongwith higher oil prices, protectionists tendencies in some of the economies and tightening monetary conditions in the developed countries leading to lower capital inflows will remain downside risk.