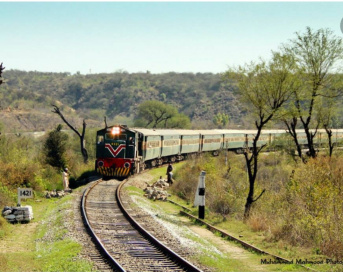 The project will be tabled before Executive Committee of National Economic Council (ECNEC) for formal approval. Train speed will increase from the current 65-105 to 120-160 km per hour and railways share of freight transport volume will increase from less than 4 percent to 20 percent, officials of Pakistan Railways informed the parliamentary panel on Wednesday.

The new estimates of the project are based on the preliminary design which was signed by Pakistan and China on April 28 last during the visit of Prime Minister Imran to Beijing. Up-gradation of Main Line-1 and establishment of dry port near Havelian are part of early harvest project to be completed by 2025.

The Sub-Committee of Senate Standing Committee on Railways met with Senator John Kenneth Williams in the chair. The parliamentary panel was given a detailed briefing on the Pakistan Railways projects relating to CPEC and the initiatives taken by it (Pakistan Railways).

The supervisor of CPEC project at Railways Basharat Waheed informed parliamentary body that physical works for phase-1 projects of the ML-1 was likely to kick off in January 2020.The project would be completed in four year-time at an estimated cost of $2.248 billion.

The project will be executed in three phases. The PC-1 for Package-1 based on cost estimates had been validated by the third party review consultants that would be submitted to the Planning Commission in June this year.

The project of up-gradation of ML-1 has been declared a strategic commercial project with loan on favourable terms as it presents a perfect business plan covering 75 percent traffic/population and 65 percent industrial areas.