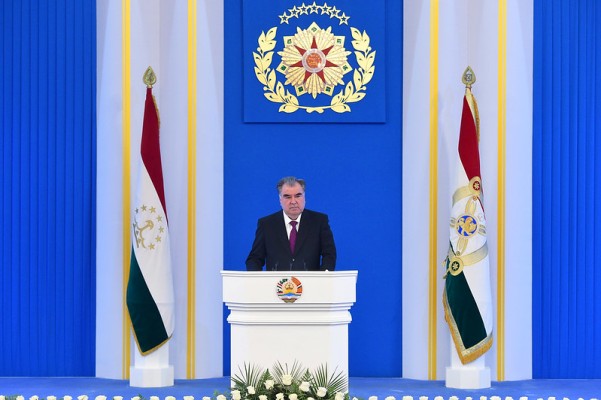 DUSHANBE: Tajikistan or the Republic of Tajikistan is a green mountainous country located in Central Asia, enjoying untouched beauties of the nature. With an area of 143.100 km2 and an estimated population of over 9 million, mostly speaking Tajik language, the country, before 28 years, was part of the former Soviet Union.

With a shared language and culture, Tajikistan is one of Afghanistan good neighbors bordering the country to the north.

After the disintegration of former Soviet Union on 9 September 1991, Tajikistan becomes an independent sovereign nation. But following its independence, immediately, extremism and the aliens’   interferences started to once again plunge the independent country into chaos and tragedy.

A civil war started fighting almost immediately after its independence, lasting from 1992 to 1997, with various factions supported by foreign countries – fighting one another – have been extremely feared to disturb the newly established political stability and lead the country toward devastation.

In 1992, the 16th round of the country’s parliament overwhelmingly elected one of the youngest members of the House of Representatives, Emomali Rahmon who was only 40 as the Chairman of the High Council. His wise leadership was a piece of good news and a ray of tranquility, for the Tajik people, as since the end of the civil war, the newly democratically elected system stepped up growing its economy.

President Emomali Rahmon, when the war was flaming in his country, traveled to Afghanistan and with mediation of the country’s National Hero Ahmad Shah Massoud and the then President Prof. Burhanuddin Rabbani, he reconciled with his opposition leader, Sayyed Abdullah Noori who planned to form military bases in the country.

During a short period of time, after turning off the flame of the wars, His Excellency Emomali Rahmon summoned meetings and invited the entire Tajik people to join peace and brotherhood.

After winning the overwhelming majority of the people votes and being elected as the President of the Republic of Tajikistan, he wisely worked for development of culture, industry and building of the country.

Now Tajikistan is not the country which was 25 years ago. It has advanced more and is developing by each passing day.

As part of his foreign policy and under his wise leadership, Tajikistan could immediately tighten diplomatic relations with the world, international community and the United Nations, and domestically it worked for the youth growth and returning of the women rights, as well as paid serious attention to agriculture, animal-husbandry and horticulture in the land-locked country.

President Rahmon’s initiation of building the world’s tallest dam, which has become popular by the name of its area, Roghun, could highly be praised as an effective plan to construct the most powerful hydroelectric power plant in Vakhsh cascade, benefiting Afghanistan and some other Tajik neighboring countries, besides being highly used locally.

The neighboring country’s wise leadership also did more for religious scholars providing them with all-out facilities to carry out their Islamic affairs irrespective of linking to politics, which are widely misused by terrorist networks.

Some 12 years ago, under President Emomali Rahmon instruction, a grand international symposium was held in Dushanbe on further recognition of Imam-e-Azam Abu Hanifa, who is one of the four founder of Islamic jurisprudences which has remained the most widely practice law school  in the world.

Over 500 religious scholars and invitees from many Muslim countries, such as Saudi Arabia, Egypt, Iran, Afghanistan and Syria attended the ceremony to deliberate on various aspects of the life and teaching of the founder of Hanafi school of Sunny jurisprudence.

Besides delivering speeches about Imam Abu Hanif’s school and his personality, they denounced extremism terrorism in all their forms and manifestations and commend the Tajik Leader Emomali Rahmon for his special regard to the Islamic teachings.

For Afghanistan, the Tajik leader did more as he raised the voice of the Afghan people and defended their rights via national and international tribunes, when it was hosting thousands of refugees after the country fell at the Taliban militants backed by their foreign terrorist supporter.

He ordered the building of five Afghan –style schools for the Afghan children in the capital Dushanbe, where teachers have been provided with handsome salaries and the students educated in their mother language.

Likewise, Kabul based Tajikistan embassy led by Sharofuddin Emam and its former counselor, Mr. Saad Sharifi have also started cooperating with the Afghan traders and cultural persons and man of art for the past more than 10 years.

Tajikistan Ambassador to Afghanistan, Sharofuddin Emam and former counselor of the friendly country, Mr. Saad Sharifi have also spared no effort to cooperate with the Afghan man of culture and art and has had special cooperation with the International Paiwand Association in Afghanistan.

In fact, Emomali Rahmon enjoys a high capability and full experiences of good governance, as he provided during his tenure as Tajik president.

The author is Chief of the Cinematographers Union of Afghanistan and member of Paiwand  – International Association Council.

The article was originally published in the Kabul Times Newspaper.