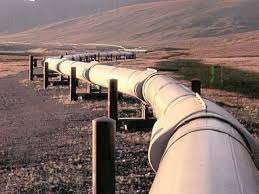 Sheraz Khan
Islamabad
Turkmenistan and Russia are in a race to capture market of Pakistan and India by exporting gas through pipeline.
Turkmenistan was already working US backed US$10 billion Turkmenistan-Afghanistan-Pakistan and India (TAPI) pipeline project and Russia have also entered into race of building offshore gas pipeline from Iran to Pakistan and India.
According to officials, fearing threat from Russia, the participating countries of US$10 billion Turkmenistan-Afghanistan-Pakistan and India (TAPI) pipeline project have approved an alternate plan to cut time of project implementation.
The targeted timeline of project implementation was year 2020 but under an alternate plan, the participating countries would be able to complete the project next year 2019.The Russia has shareholdings in oil and gas fields in Iran and was pressing Pakistan to sign government to government deal on offshore gas pipeline which will pass through Pakistan.
The steering committee on TAPI pipeline project has approved a plan.
Official said that government had proposed new plan to implement the project in shortest possible time. He said that the plan had been approved by steering committee. Under new plan, pipeline would be laid in first phase without installing compressors on pipeline.
Turkmenistan will pump free flow of gas without compressors. The pipeline diameter size was 56 inch and therefore, one third gas flow would be possible in this process. Under this plan in one and half year, the flow of gas would start, official added.
He said that pipeline had been divided in nine lots and successful companies in bids would be asked to work on different lots to implement the project in shortest possible time.
Pakistan was currently importing LNG from Qatar and Italy and was in talks with different countries to sing government to government LNG supply deals. Despite LNG deals, Pakistan needs gas to provide to industry. This is why different countries like Iran, Turkmenistan and Russia were in row of pipeline gas to Pakistan, official added.
The US has been supporting the project to meet the energy needs of Afghanistan, Pakistan and India. This is a regional energy infrastructure project and would help ease tensions between the neighbouring countries due to inter-dependence, an official said.
Turkmenistan has huge gas reserves and a major chunk of its gas has been going to Russia that also supplies gas onwards to Europe. Turkmenistan has also been supplying gas to Iran. Afghanistan, Pakistan and India would be new gas markets for Ashgabat
Turkmenistan will contribute 85% of the pipeline cost estimated at $10 billion, whereas Afghanistan, Pakistan and India will have a 5% share each in investments. The cost is in addition to $15 billion capital injection required for developing a gas field from where Turkmenistan will supply gas to the three countries.
A gas sale and purchase agreement has already been signed in 2013 to establish the pricing mechanism under which gas price at Turkmenistan’s border will be around 20% cheaper than the price of Brent crude oil.
Pakistan and India will each receive 1.325 billion cubic feet of gas per day (bcfd) while Afghanistan will receive 500 mmcfd
Ends